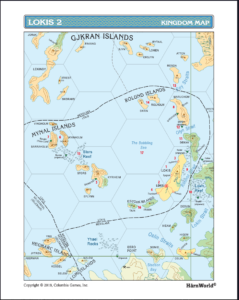 Lokis is a small, independent kingdom lying off the west coast of Menglana in Ivinia. It consists of the islands of Dekan, Estork, Kyriheim, Lokis, and Maruchom, along with numerous smaller islands. These islands are often shrouded in fog and have cliffs on most sides; easy spots to land a boat are uncommon.

The kingdom has been ruled by Clan Thoryn since its founding in 316 TR. In addition to being the royal clan, the Thoryns also serve as the priest-clan of Lokis. The kingdom is not militaristic in outlook; it has never been attacked and has no intention of conquering others. Adherents of Sarajin consider the kingdom holy and treaties with the other Ivinian kingdoms protect its sanctity. Most of Lokis’ residents are fanatically devout. The kingdom is a center of trade in worked amber and renowned for the high quality of the religious artefacts produced by its craftsmen.

The kingdom’s approximately 1,400 inhabitants live on only two permanently settled islands, Lokis and Kyriheim. The kings of Lokis have long heeded a prophetic warning against expanding to the other islands. The belief that these islands contain the lairs of huge sleeping sea dragons has kept settlers away.

Although often foggy, Lokis Island is generally pleasant. It is warmer than most parts of Ivinia and amply provided with fresh water. It has only one large settlement, Lokis vathran, which has 400 residents. The king’s main residence is a fine hall in the nearby thran of Thoryheim. The second- largest settlement, Harkorvik, is home to 175 people and is also held by Clan Thoryn.

Kyriheim Island has the kingdom’s third-largest settlement, Bronwynby. Most inhabitants are members of the Cult of the Elkyri, the only organised Sarajinian religious order. The cult’s members maintain and protect the island’s religious sites, primarily the burial ground of the Elkyri, mortal women who have been granted semi-divine status by Sarajin. Kyriheim is also home to the Oracle of Lokis, a foreteller of destiny whose prophecies are famed both for their accuracy and their ambiguity. Many supplicants travel to Kyriheim to have their questions answered by the Oracle.

As adherents of Sarajin, Lokians are honor-bound to follow the Ljarl. Serious crimes are rare, with more of them committed by visitors than residents. Lokis may be the safest place in Ivinia.

Cases are tried at the monthly Theng in Thoryheim. Most are settled by the payment of wergild. Corporal punishment is almost unheard of and outlawing is reserved for rare heresy cases.

Vendettas are also rare on Lokis; if the judgment of the king does not quickly resolve the issue, the Oracle of Lokis can be consulted.

Lokis vathran is the penultimate stop for pilgrims bound for Kyriheim, and the settlement derives considerable revenue from their stay.

The custom of needing Harkor’s Token to visit Kyriheim is no longer mandatory but pilgrims always spend considerable amounts of coin in the town.

They also invariably bring gifts for the vathran’s Sarajinian temple

The island of Lokis produced enough food (oats, barley, sheep, deep-sea fish, shellfish, seal meat and oil) to sustain itself but rely on imports for most luxury foods. It has few natural resources beyond its farmland.

The tranquil atmosphere of Lokis appeals to many skilled artisans, and the island is justly famous for its intricate and beautiful religious artifacts. Chief amongst these are superb amber carvings inlaid with silver and gold, tapestries depicting tales from the eddas, and intricate woodcarvings, most notably in the form of statuettes of the various Elkyri.

1 ISLE OF LOKIS
Almost all of the kingdom’s population lives on this island. Much of it is covered in oat and barley fields planted between stunted forests and peatland heather, which provides grazing for hardy sheep.

2 VATHRAN OF LOKIS
The kingdom’s cultural and economic center is home to 400 people and has an impressive temple to Sarajin.

3 HARKORVIK
Lokis’ second-largest settlement has 175 residents. A religious festival on 16th Saraju draws large crowds and tends to get more rowdy than is typical for Lokis.

4 THORYHEIM
Thoryheim is Clan Thoryn’s seat of government and site of the royal residence. The Theng (justice-moot) is held here each month in a natural rock amphitheater. Kings of Lokis are crowned here under an ancient oak.

5 KYRIHEIM ISLE
Kyriheim, the most sacred part of the kingdom, is home to the Cult of the Elkyri, a sect dedicated to the veneration of Sarajin’s wives, and to the Oracle of Lokis, famed for the accuracy of its prophesies and for the difficulty of interpreting the riddles that constitute them.

The small settlement of Bronwynby is home to the 90 or so members of the cult. A necropolis for Elkyri and kings is nearby. The island’s many barrows are rumored to contain vast treasures.

A large pod of gray whales assembles in Alaryr Bay each spring. They are considered sacred; hunting whales is not permitted within three leagues of the island.

6 MYNAL ISLANDS
These rocky islands are home to a massive colony of gulls, fulmars, and other seabirds. Boats that venture near the islands will be subject to dive bombing and vomit attacks. During nesting season, a bountiful supply of eggs can be found on the eastern cliffs.

7 BARRAHOLM
The abandoned village on this island was once occupied by the pre-Ivinian Yarili people. The stone ruins of their large, round, dome-roofed houses are intermingled with standing stones of unknown purpose. The ruins have been secretly occupied by a band of pirates, who are careful to maintain the abandoned appearance of the site.

8 MARUCHOM ISLAND
Known for its extensive Earthmaster site, this island also features a large deserted Yarili village and empty pirate camps. The Earthmaster site is feared by most locals, who believe it will mean their death if they enter.

9 RININOR STRAIT
This perilous strait is a shortcut between Lokinfjord, Ostufjord, and Horkofjord. Local captains avoid the dangerous route and its concealed reefs except when forced by adverse weather to run the gap.

10 LOWN REEF
The reefs on both sides of the Rininor Strait
are home to large colonies of seals. The dangerous waters take a large toll each year as hunters brave the submerged rocks to reach the seals.

11. DEKAN ISLE
Lokians visit this uninhabited island to cut timber and hunt wild game. King Barandal tried to colonize Dekan but was slain by Maruchom pirates in Olyn Bay. Clan Abaalarsen is petitioning King Kalgis for permission to attempt to resettle the colony at Baranheim.

12 OLYN STRAIT
The many wrecked ships that can be glimpsed in the shallow waters of this strait were sunk in a battle between Lokis and pirates; King Barandal was among the dead. Many believe the lost souls can rise from the wrecks and drag sailors to their death below the waves.

13 FOY STRAITS
A fast-moving current can whisk unwary vessels north through these straits into Gjkran Bay. The current is sufficiently strong to defeat attempts to row back through.

14 ROLUND ISLANDS
These uninhabited islands are the best place to catch sables, which are desired for their fine black fur. The desolate islands are said to be haunted by the malign ghost of Rol, a legendary explorer and hunter who struggled for many winters to settle here.

15 STORS REEF
These dangerous rocks have been the end of many vessels. The rocks are nearly invisible beneath the waves at high tide but not deep enough to prevent ripping the keel off even shallow-drafted vessels.

16 ESTORK ISLANDS
These low-lying wooded islands are frequently shrouded in fog. Lokians travel to the Estorks to cut timber in the height of summer and return in the early autumn to cull the pigs that roam wild on the islands.

17 THE BUBBLING SEA
The sea in this area occasionally churns and rolls violently, as if it was boiling. Some bubbles are said to be large enough to swallow whole ships, sinking them without a trace. The seas are invariably covered in fog when it is not raining. Many Lokians believe that all the fogs that engulf Lokis are birthed here. The area is avoided by local sailors. 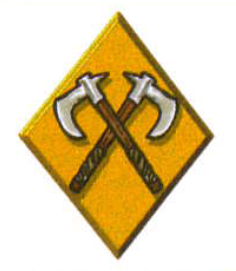 King of the Icy Wind,
Lord of the Perilous Quest,
Wielder of the Blooded Axe,
Master of Frosty Climes,
The Gray Slayer.

Sarajin is the god of battlelust, requiring fearlessness and bravado of his adherants. He loves the “sport” of war and takes great pleasure in watching and even participating in large battles. The only virtue universally admired by adherants of Sarahin is courage. He is the patron god of the Ivinians.

Sarajin is typically portrayed as a giant, yellow-haired, bearded warrior clad in furs and leather, who rides across the snowy wastes in his sled, Shalka. He bears Fakang, his great double-bladed axe, which is able to split a mountain with a single blow.

Symbols & Regalia
Sarajin is typically symbolized by Fakang, his battle-axe, Shalka, his sled, a pair of crossed handles or one of his Pradeyalkri servants. Pious adhreants of the Kind of the Icy Wind wear one or more represantations of these symbols on their persons.

Elkyri
The Elkyri are Sarajin’s wives and helpmates, mostly recruited from slain mortal shieldmaidens. They are demi-goddesses or demons, depending on one’s point of view. Although they are theoretically immortal, Elkyri can be killed and their numbers rarely exceed one dozen.

They will sometimes intercede, often on their own initiative, on behalf of worthy mortals. Most Sarajinians pray to a favourite Elkyri as well as worshipping the god directly. They are often more generous, and usually more gentle than Sarajin himself. Utterance of an Elkyri’s name three times will generally attract her attention.